It is National Autism Awareness Month, and it is time to take stock, re-assess, and for me, take a look back.  I began my blog, DIStherapy, almost exactly 2 years ago, and as a marker for what April will always mean for me and my family.  Oh my, awareness has come miles and miles since 1995!!!

My boy was diagnosed before he was two; early, yes, but after years of working as a physical therapist, interning in a local children’s hospital, I knew in my heart that autism had touched my family.  I recognized the habitual jumping up and down, the covering of the ears, flapping of hands, lack of eye contact- all too well.  His diet was limited to pizza (no cheese), and raisin bagels; breakfast, lunch and dinner.  He was averbal until he was 4, toilet trained at 5, and as is characteristic, a prisoner in his own little world.  Early, aggressive intervention started to turn the tide towards the end of his Kindergarten year…

Shortly before his 5th birthday, my son told me that when he “grewed up” he was going to play ball at Duke University.   He would stand in front of the TV and jump up and down for hours while he watched college basketball.  He would read (yes, at 5) the ESPN Sports Almanac and memorize every record and every Final Four champion since 1939.  He was diagnosed with autism before he was 2.  I knew in my heart that he had the disorder.  Despite assurances from our pediatrician, my parents and family friends, I could connect the dots.  As a physical therapist, I had completed my internship at a local, prestigious children’s hospital, and had treated many young children with “severe developmental delays”.  In the 70’s, the diagnosis of autism did not exist as we know it today, but the patterns were nauseatingly familiar; non-verbal and uncommunicative, repetitive behaviors, self-stimulation, hyperfocus in some areas, an inability to engage in play, and no eye contact.   At 14 months, I had my baby evaluated, but knew the diagnosis before I heard it.  The dreaded A word.  In the early 1990’s, autism still seemed akin to a death sentence.  But I would “handle” it.  After all, I had successfully treated professional hockey players, Division I athletes and everything in between.  Certainly I could treat and manage my own toddler’s rehabilitation…  We began a home regime of special education, speech, occupational and physical therapy- the full court press.  Unfortunately, my son was unimpressed and results were scant.  When not in therapy, he was jumping on the bed for hours a day, or flicking the lights in his room on and off repetitively, or inserting his video tapes into the VCR only to eject them seconds later.  He could not engage in any activity or play with his older brother, and he had no playmates.  By age 3, despite an impressive treatment schedule, there had been no significant gains made.  By chance, I bought him his first Nerf basketball set for his birthday (mainly because I was running out of ideas for safe, engaging toys).  He now was shooting free throws 4 or 5 hours a day.  When he was around other children, he still wasn’t talking, but was playing with his now requisite basketball.  This was far more socially acceptable than standing in the corner jumping up and down continuously.  (Speaking of which, his toe walking and jumping in place was aiding his jump shot.)  As he began school, the size of his basketball collection grew.  When he attended a local after school SCORE! learning program with his brother, he quickly realized that a good score on his computer meant several chances at a free throw.  Forget the prizes, he wanted the hoop!  By the end of that year, at 5 years old, he had the most ribbons on the wall for scoring the most 3 pointers, and became an amazing reader in the process.  Needless to say, we signed him up for his first basketball team shortly thereafter; A TEAM– with other children of the same age.  As the years passed, his other abilities truly blossomed, and many of his sensory peculiarities diminished.  Though true friendships remained elusive, he could be socially accepted once he stepped onto the court.    When he is studying for an important test (like the SAT) he still burns off anxiety and maintains focus by shooting at the Nerf basketball hoop ever-present in his room. Two years ago, his Varsity team won the State Basketball Championship.

Thank you, basketball.  You pulled my son into life with the living. In his four high school years, Devin was elected to student government, became a member of a Youth Action Board for special education, and had straight A’s.  He graduated and was awarded the prestigious Headmaster’s Award for his class; how beautifully ironic- he became THE role model for his peers.  He’s “going to the dance”, and is a freshman at Georgetown University.  In case you’re wondering, he brought his Nerf ball with him!  Though he is not playing on their basketball team, he did get back on the court six weeks ago while singing the National Anthem before the Georgetown vs. Syracuse game.

I continue to use my blog to document his progress, track my affiliation with Team Up! with Autism Speaks,

share his accomplishments, (you can watch his You Tube video raising awareness of bullying in the special needs community here), and in general give hope to families just beginning their journey with the “A word”.  Much progress has been made since my son’s diagnosis in 1995, but much work remains ahead.  As Devin says, we speak for those who don’t yet have a voice.  I thank God he has found his (and he’s a darn good tenor too). 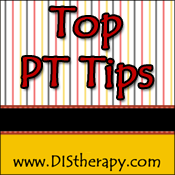 Through awareness and education, many young families now know to look for potential early warning signs in their children birth through 5.  A good checklist can be found here.  But from a physical therapist’s standpoint, more profound than the “delayed motor skills” marker is seeing a young child walking on their toes.  Though it may disappear over time, it is a red flag for neurological immaturity, and should always result in an assessment.  Always.  Many parents may miss some of the other ambiguous potential warning signs, but this one should stand out.  Remember- there is no downside to having a child evaluated, but there can be a lifetime of consequences without it.  Early intervention, I mean earlier than 2 years of age, is the closest thing to a cure for autism that we now possess.

Finally! A flexible, as-you-want-it, as-you-need-it exercise program for older adults. Whether you are looking for the BEST chair workout or … END_OF_DOCUMENT_TOKEN_TO_BE_REPLACED

Ouch. That knee. Again. Knee pain is among the most common complaints a physical therapist addresses. One modality that has remained in my … END_OF_DOCUMENT_TOKEN_TO_BE_REPLACED

Many Americans were introduced to the concept of working from home when the COVID-19 pandemic struck. Back in March, many thought the remote … END_OF_DOCUMENT_TOKEN_TO_BE_REPLACED