Time to take a ride on the wild side!  Beth (Pursuing the Magic and The Magical Blogorail) and I continue our blogger countdown to the 15th Anniversary of Disney’s Animal Kingdom with Mike @Mickey_MDOD and the year 2003.

Hello everyone, and welcome to the year 2003 in our series, 15 Days to 15 Years. This special series is meant to countdown each year on our way to celebrate Disney’s Animal Kingdom Park’s 15th anniversary on April 22nd, 2013! I have the distinct honor in writing about the year 2003.

One of the biggest highlights from 2003 was the announcement that the Animal Kingdom would add a new roller coaster at the theme park! This coaster, which would become Expedition Everest, is one of my favorite coasters at Walt Disney World, and was a welcome addition to the park!

In addition to the Expedition Everest news, for the 2003 year Disney’s Animal Kingdom Park saw 7.3 million people visit the park for the year (according to coastergrotto.com) — which, for a park that at this time didn’t have a major roller coaster, is still a pretty good turnout!

The funny thing for me about writing about 2003 is that we didn’t go to Disney’s Animal Kingdom in 2003 — in fact, we didn’t go to Walt Disney World at all that year. Our daughter Sophie was only 2 that year, and because of her small stature, we took a break from our Disney trips for a while. But, while I didn’t travel to Animal Kingdom in 2003, I still have some incredible memories from our trips to the parks over the years, and I thought I would share some of my favorites with you today. 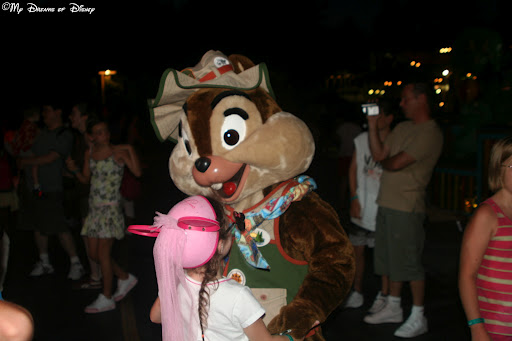 One of my favorite memories was of the time we were able to experience Evening Extra Magic Hours at Animal Kingdom — which, you may know, they do not do anymore!

On this particular evening back in 2007, we went for the extra magic hours, and came to DinoLand, U.S.A., where we found out that a block party was going on! It was so much fun, seeing Sophie interact with Chip and Dale and Goofy, it was a truly special memory that we haven’t forgotten in all the years since! 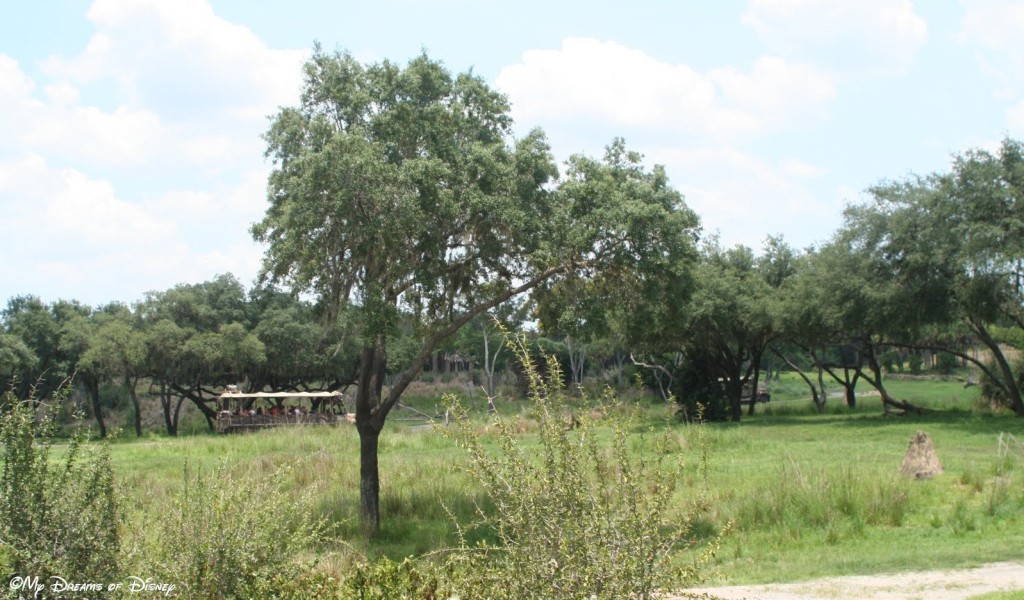 To me, part of the fun of Disney’s Animal Kingdom is, quite simply, the expansive wildlife areas that you can see at the park. To me, this photo symbolizes what the Savannah is all about as you see some of the vehicles from Kilimanjaro Safaris.

With so many unique things to explore, Disney’s Animal Kingdom, while stuck with the rap of being a “half-day park” — is actually much more then that. The key to Animal Kingdom is to experience the park the way that all of the parks are meant to be seen — at a slower, more relaxed pace, not always worried about getting from one ride to the next. Take time to slow down, smell the roses (or whatever that smell is…) and enjoy being in the moment.

Thank you for stopping by, I hope you have enjoyed our look at Disney’s Animal Kingdom park!

I’ve often said that Mike is the busiest blogger I know! In addition to his posts 40 Days to 40 Years (Walt Disney World), and 30 Days to 30 Years (Epcot),he is a contributor to numerous Disney blogs, and shares on Facebook and Twitter.  Heck, he can even help book your next Disney vacation!!


Tomorrow, Rosanne @DisnyRoe keeps us “on point” with an inside look at Disney’s Animal Kingdom 2004.

Whether you are now an armchair traveler, a new remote worker, or ZOOM addict, many of us are suddenly spending hours and hours in the … END_OF_DOCUMENT_TOKEN_TO_BE_REPLACED

Now you've done it. In an aspiration to use your "free" time to reinvent your body and health, you've jumped in a bit too hard. Ouch. Even … END_OF_DOCUMENT_TOKEN_TO_BE_REPLACED

Let me begin by stating that this post is three weeks in the making. My husband had a cerebral vascular accident (stroke) last month, … END_OF_DOCUMENT_TOKEN_TO_BE_REPLACED