Welcome to 30 Days to 30 Years; a countdown series that pays homage to the past 30 years of Epcot’s history.  Today, my co-host, Beth (Pursuing the Magic) and I are thrilled to welcome Manda; co-host of our previous series 20 Days to 20 Years, and owner of  Manda’s Disney Blog!  Get ready for 1998.
1998 saw big changes for one of Epcots most famous
attractions, ‘Journey into Imagination’. Having opened in 1983 in the
Imagination! Pavillion, 1998 brought a major renovation for the
attraction …which involved the removal of a very famous purple dragon –
Figment! As well as the Dreamfinder!
When the attraction reopened in October 1999 as ‘Journey into
YOUR Imagination’, guests were shocked to find the Dreamfinder missing
completely … and Figment’s appearances now only consisting of a few cameos in
the queue movies, a constellation in the connection lab and at the end of the
ride where he is only heard, not seen.
There was an outcry! Guests felt Disney had simply tried to
create a tie-in ride with ‘Honey, I Shrunk The Audience’, and they were furious
when they came across the downstairs Image Works, which appeared to be a
huge advert for Kodak.
Fans of the original attraction, and Figment and Dreamfinder,
took action and boycotted the new Imagination ride as well as Kodak Film. With
support from both Kodak and Michael Eisner (CEO of The Walt Disney Company
1984-2005), the campaign was successful! Little over two years after reopening,
the attraction was closed for yet another revamp.
Just in time for the ‘100 Years of Magic Celebration’, the
attraction reopened in June 2002 as ‘Journey into Imagination with Figment’ …
it’s well seeing they knew what the fans wanted!
Now Figment appears all over
the attraction, in the sound lab, the sight lab, and the smell lab, where Figment
becomes a skunk and sprays guests with a stinky smell! … which actually turns out to
be the smell of coffee  … phew! Finally, in the touch and taste lab, the attractions host Dr Nigel Channing stops the tour after seeing the chaos Figment is
causing. Figment then takes riders to his own house, which he turns upside down
with his carefree mind, helping guests to understand that Imagination should be
set free! In the finale, guests see loads and loads of Figments everywhere! And Figment and Dr Channing sing the attractions famous theme song ‘One Little
Spark’. Talk about bringing Figment back with style!
There have long been rumours of the return of the
Dreamfinder too in a fourth version of the attraction. Figment and Dreamfinder
were reunited last year at the D23 event Destination D: Walt Disney World 40th,
for a live performance of ‘One Little Spark’.
Check out the awesome reaction from
the crowd!
If a fourth incarnation of this attraction does indeed go ahead, then maybe … just maybe … we can be treated to a more
permanent reunion of Dreamfinder and his amazing creation … Figment!
Thank you so much Donna and Beth for having me as part of this brilliant series! If you want to check out more from the other awesome bloggers taking park, click the button below! 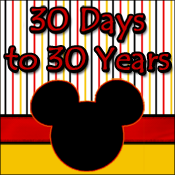 And you can sample more of Manda’s brilliance at her blog, @mandadisneyblog, Facebook,  Pinterest and You Tube!

Tomorrow we’re gonna party like it’s 1999.  Look for Mark of Illuminating Epcot fame to close out  the century…

In the times we live in today, a home gym sounds better than ever. Just one problem- the price tag that comes with renovations. Gym … END_OF_DOCUMENT_TOKEN_TO_BE_REPLACED

During the spring and the dog days of summer, it’s just too easy to eat foods that can derail a healthy diet. Decadent ice cream, moist … END_OF_DOCUMENT_TOKEN_TO_BE_REPLACED

Ommmmmmm. It has finally arrived. A runDisney offering that appeals to elite runners AND coach potatoes. Especially if you have ever wanted … END_OF_DOCUMENT_TOKEN_TO_BE_REPLACED